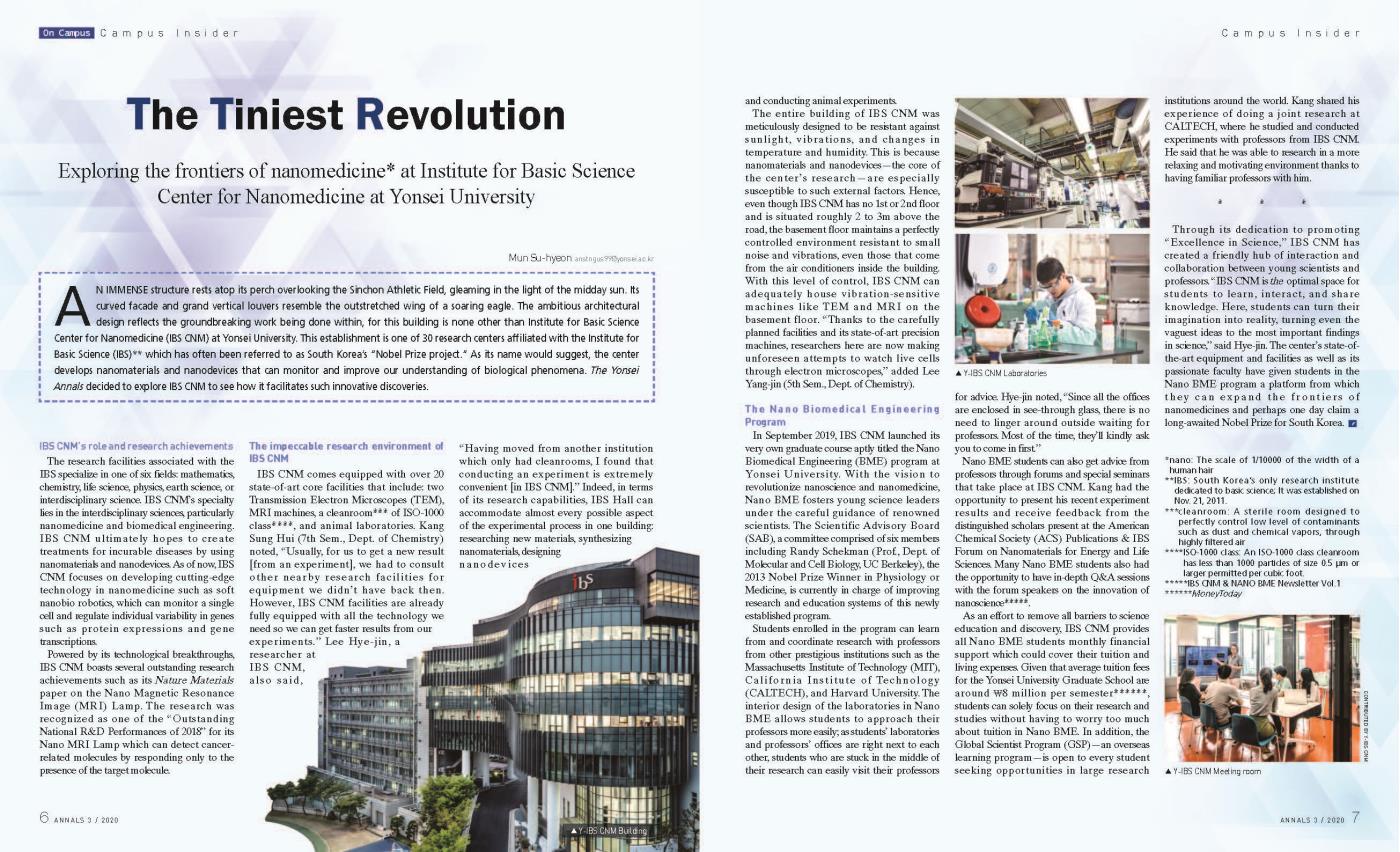 AN IMMENSE structure rests atop its perch overlooking the Sinchon Athletic Field, gleaming in the light of the midday sun.Its curved facade and grand vertical louvers resemble the outstretched wing of a soaring eagle. The ambitious architectural design reflects the groundbreaking work being done within, for this building is none other than Institute for Basic Science Center for Nanomedicine (IBS CNM) at Yonsei University. This establishment is one of 30 research centers affiliated with the Institute for Basic Science (IBS)** which has often been referred to as South Korea’s “Nobel Prize project.” As its name would suggest, the center develops nanomaterials and nanodevices that can monitor and improve our understanding of biological phenomena. The Yonsei Annals decided to explore IBS CNM to see how it facilitates such innovative discoveries.

The research facilities associated with the IBS specialize in one of six fields: mathematics, chemistry, life science, physics, earth science, or interdisciplinary science. IBS CNM’s specialty lies in the interdisciplinary sciences, particularly nanomedicine and biomedical engineering. IBS CNM ultimately hopes to create treatments for incurable diseases by using nanomaterials and nanodevices. As of now, IBS CNM focuses on developing cutting-edge technology in nanomedicine such as soft nanobio robotics, which can monitor a single cell and regulate individual variability in genes such as protein expressions and gene transcriptions.

Powered by its technological breakthroughs, IBS CNM boasts several outstanding research achievements such as its Nature Materials paper on the Nano Magnetic Resonance Image (MRI) Lamp. The research was recognized as one of the “Outstanding National R&D Performances of 2018” for its Nano MRI Lamp which can detect cancer-related molecules by responding only to the presence of the target molecule.

IBS CNM comes equipped with over 20 state-of-art core facilities that include: two Transmission Electron Microscopes (TEM), MRI machines, a cleanroom*** of ISO-1000 class****, and animal laboratories. Kang Sung Hui (7th Sem., Dept. of Chemistry) noted, “Usually, for us to get a new result [from an experiment], we had to consult other nearby research facilities for equipment we didn’t have back then. However, IBS CNM facilities are already fully equipped with all the technology we need so we can get faster results from our experiments.” Lee Hye-jin, a researcher at IBS CNM, also said, “Having moved from another institution which only had cleanrooms, I found that conducting an experiment is extremely convenient [in IBS CNM].” Indeed, in terms of its research capabilities, IBS Hall can accommodate almost every possible aspect of the experimental process in one building: researching new materials, synthesizing nanomaterials, designing nanodevices and conducting animal experiments.

The entire building of IBS CNM was meticulously designed to be resistant against sunlight, vibrations, and changes in temperature and humidity. This is because nanomaterials and nanodevices—the core of the center’s research—are especially susceptible to such external factors. Hence, even though IBS CNM has no 1st or 2nd floor and is situated roughly 2 to 3m above the road, the basement floor maintains a perfectly controlled environment resistant to small noise and vibrations, even those that come from the air conditioners inside the building. With this level of control, IBS CNM can adequately house vibration-sensitive machines like TEM and MRI on the basement floor. “Thanks to the carefully planned facilities and its state-of-art precision machines, researchers here are now making unforeseen attempts to watch live cells through electron microscopes,” added Lee Yang-jin (5th Sem., Dept. of Chemistry).

In September 2019, IBS CNM launched its very own graduate course aptly titled the Nano Biomedical Engineering (BME) program at Yonsei University. With the vision to revolutionize nanoscience and nanomedicine, Nano BME fosters young science leaders under the careful guidance of renowned scientists. The Scientific Advisory Board (SAB), a committee comprised of six members including Randy Schekman (Prof., Dept. of Molecular and Cell Biology, UC Berkeley), the 2013 Nobel Prize Winner in Physiology or Medicine, is currently in charge of improving research and education systems of this newly established program.

Students enrolled in the program can learn from and coordinate research with professors from other prestigious institutions such as the Massachusetts Institute of Technology (MIT), California Institute of Technology (CALTECH), and Harvard University. The interior design of the laboratories in Nano BME allows students to approach their professors more easily; as students’ laboratories and professors’ offices are right next to each other, students who are stuck in the middle of their research ideas can easily visit their professors for advice. Hye-jin noted, “Since all the offices are enclosed in see-through glass, there is no need to linger around outside waiting for professors. Most of the time, they’ll kindly ask you to come in first.”

Nano BME students can also get advice from professors through forums and special seminars that take place at IBS CNM. Kang had the opportunity to present his recent experiment results and receive feedback from the distinguished scholars present at the American Chemical Society (ACS) Publications & IBS Forum on Nanomaterials for Energy and Life Sciences. Most Nano BME students also had the opportunity to have in-depth Q&A sessions with the forum speakers on the innovation of nanoscience*****.

As an effort to remove all barriers to science education and discovery, IBS CNM provides every Nano BME student monthly financial support which could cover their tuition and living expenses. Given that average tuition fees for the Yonsei University Graduate School are around ₩8 million per semester******, students can solely focus on their research and studies without having to worry too much about tuition. In addition, the Global Scientist Program (GSP)—an overseas learning program—is open to every student seeking opportunities in large research institutions around the world. Kang shared his experience of doing a joint research at CALTECH, where he studied and conducted experiments with professors from IBS CNM. He said that he was able to research in a more relaxing and motivating environment thanks to having familiar professors with him.

Through its dedication to promoting “Excellence in Science,” IBS CNM has created a friendly hub of interaction and collaboration between young scientists and professors. “IBS CNM is the optimal space for students to learn, interact, and share knowledge. Here, students can turn their imagination into reality, turning even the vaguest ideas to the most important findings in science,” said Hye-jin. The center’s state-of-the-art equipment and facilities as well as its passionate faculty have given students in the Nano BME program a platform from which they can expand the frontiers of nanomedicines and perhaps one day claim a long-awaited Nobel Prize for South Korea.

**IBS: South Korea’s only research institute dedicated to basic science. It was established on Nov. 21, 2011.

***cleanroom: A sterile room designed to perfectly control low level of contaminants such as dust and chemical vapors, through highly filtered air