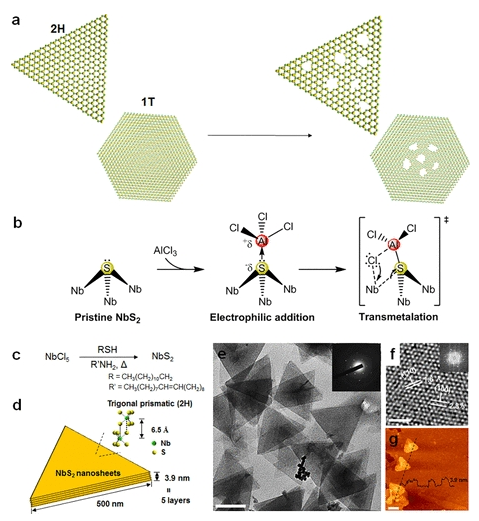 Achieving a molecular level understanding of chemical reactions on the surface of solid-state nanomaterials is important, but challenging. For example, the fully saturated basal plane is believed to be practically inert and its surface chemistry has been poorly explored, while two-dimensional (2D) layered transition-metal chalcogenides (TMCs) display unique reactivities due to their unusual anisotropic nature, where the edges consisting of unsaturated metals and chalcogens are sites for key chemical reactions. Herein, we report the use of Lewis acids/bases to elucidate the chemical reactivity of the basal plane in 2D layered TMCs. Electrophilic addition by Lewis acids (i.e., AlCl3) selectively onto sulfides in the basal plane followed by transmetalation and subsequent etching affords nanopores where such chemical activations are initiated and propagated from the localized positions of the basal plane. This new method of surface modification is generally applicable not only to various chemical compositions of TMCs, but also in crystal geometries such as 1T and 2H. Nanoporous NbS2 obtained by this method was found to have an enhanced electrochemical energy storage capacity, offering this chemical strategy to obtain functional 2D layered nanostructures.